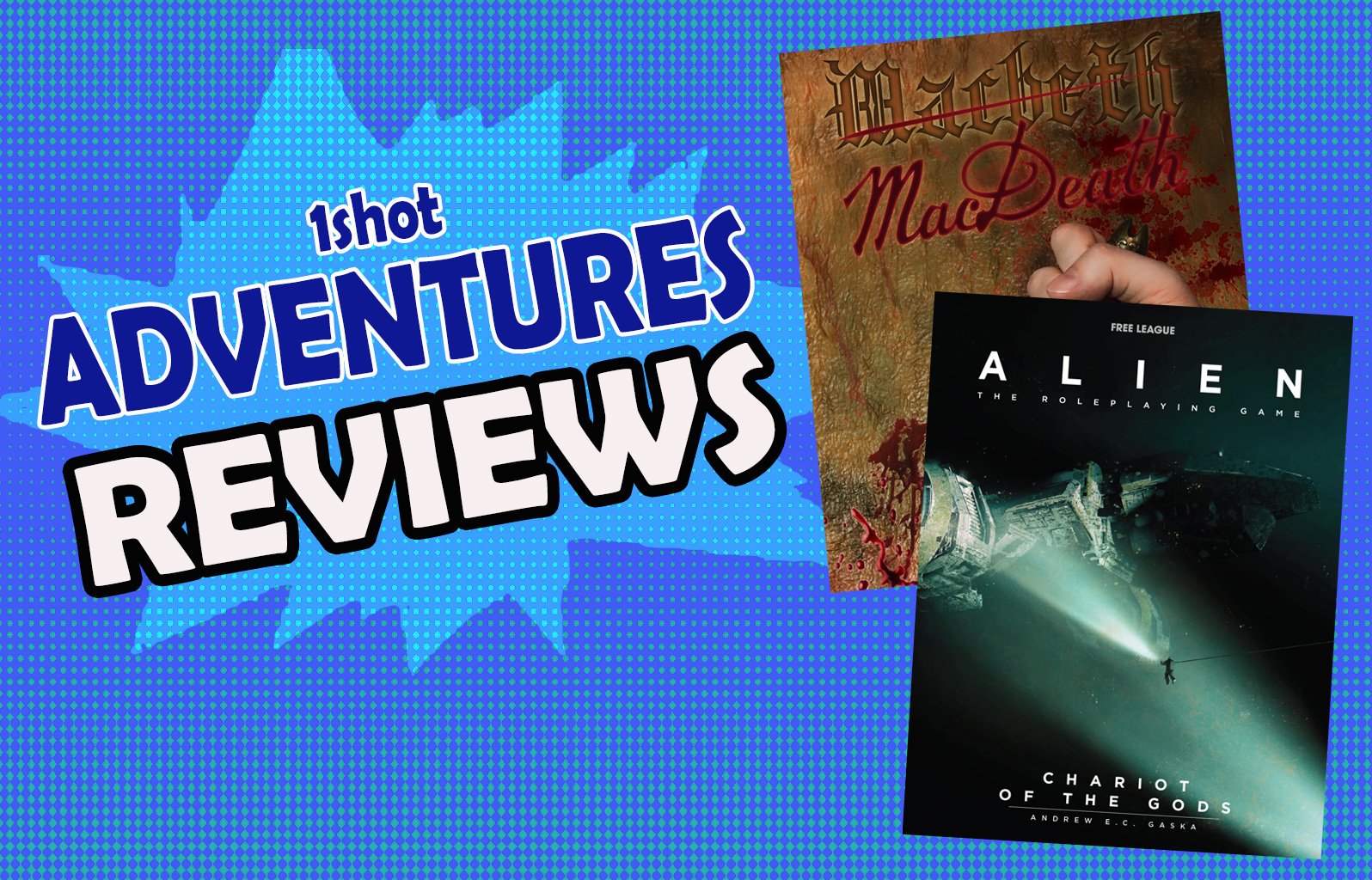 This month I review two other one-shot adventures that I enjoyed running: Quest Givers’ MacDeath and Alien: Chariot of the Gods. And to save you a little work, you can download some of the VTT assets I used at the end of the blog.

Both adventures are solid, grim one-shots that you can finish in a session or two. They are also very easy to port to different game systems, so even if your group prefers one system over another, they’re straightforward conversions. (I ran both of them in GURPS, though the Free League’s Alien system is great for quick, tense adventures, and MacDeath is system agnostic, with a slight bent towards Dungeons & Dragons type systems).

MacDeath is a grim fantasy retelling of the classic Shakespeare play. Though the author (Professor Dungeon Master of YouTube Dungeon Craft fame) clearly knows and loves his Macbeth, the adventure requires zero knowledge of the original story. It’s distilled down to it’s very essence — Macbeth is a hero forced down a dark path of murder and tyranny. The PCs are his cousins participating and playing witness to his violent fall.

What I liked about MacDeath is its pacing. The PCs are hurled from one dreadful encounter to another, with very little room to breathe. One moment, they are wading through the carcasses of traitors, the next moment they are drinking from the cauldron of the three witches. If your players like intense, speedy adventures, this one is great.

What I loved about MacDeath is its use of interludes that pull from the player. The players kickoff the adventure reading dialogue from the witches. At key moments, they’ll briefly roleplay King Duncan, or Lady Macbeth. This technique injects enough authentic Shakespeare to make it feel different from a standard fantasy adventure, and giving an opportunity for your hammiest players to bring the story to life.

Also, Professor Dungeon Master’s uses an awesome trick in the adventure where the GM hands each player some random lines of banter before a scene starts. Players trade off reading or paraphrasing their lines, which soon creates a feel of organic storytelling — with zero GM participation. This “Banter System” is a brilliant storytelling mechanism that should be in every GM’s bag of tricks, which I also stole for Chariot of the Gods (which you can also download below).

The intense pacing of MacDeath has a downside. There’s not much room for side adventures, strategizing, or creative problem solving. Because the heroes are all Scottish Thanes (or their battle-ready daughters), there’s not a lot of difference between the characters. “I kill it with my axe” is a fine solution to most of the problems in the adventure. And while lack of agency is a theme in Shakespeare’s Macbeth – and a problem to writer acknowledges – a little more breathing room would have been appreciated.

Chariot of the Gods

Chariot of the Gods is the Alien RPG’s starter set adventure, but is also sold separately. The PCs are the blue collar crew of the USCSS Montero. Waking up early from hypersleep, they discover a long-lost vessel. What happens next involves alien births, viscera, traitors, blood, and everything else you expect from an Alien adventure.

The Alien menace in the adventure is drawn more from Prometheus than it is the original films. On the positive side, this means the threat is more insidious and more difficult to figure out than the classic xenomorph. But for Alien fans who want to die horribly amidst biomechanical jaws and facehuggers… well, they may be disappointed.

Where Macdeath excelled at pacing, Chariot of the Gods excels at pressure. From the moment the PCs wake up, they’re in trouble. And every hour of the adventure makes the situation worse. I think my players uttered “we’re so screwed” in the first 20 minutes of the session, and then it got worse from there.

Chariot of the Gods is a haunted house-style adventure, with all the pros and cons of that genre. Once the action moves to the derelict ship, the adventure is incredibly open ended. There are tons of problems to solve — technical issues, alien menaces, biohazards, stubborn NPCs, and more. How each group of players navigates and survives these issues will vary a lot.

But this open ended, haunted house approach means the GM has a lot of prep to do to run this adventure well. There are a dozen or so NPCs with motivations to understand. The ship has many decks, each with their own purpose. And once the alien threat gets unleashed, the GM has to figure out where it is and when it’s going to attack based on the players actions. There is a lot to juggle here, and much of the key information is spread out in the book. My advice for new GMs is to 1) really study the NPC motivations; 2) be flexible – don’t try to include every twist the adventure throws at the players (in fact, both times I’ve run this adventure, I’ve cut the third act twist involving a third starship).

But, if you can do the juggling, it’s worth it. It’s a FUN adventure to run, because it’s so open ended. I guarantee your players will surprise you. This adventure hits that “I can’t wait to run it again” bar that is rare for experienced GMs.

Chariot of the Gods is one of the most atmospheric, hopeless adventures I’ve run in a long time, and that quality makes it special. The authors perfectly captured the somber feel and terror of the Alien movies. If you’re a fan of horror games, bring this one to the table.

If you’d like to see a video overview of my tips and tricks running this adventure, check it out here:

For MacDeath, I’ve created original VTT tokens that you can use with any game system. For GURPS players, I also include pregenerated characters for the Thanes, as well as .GCA files for all of the PCs and NPCs in the adventure.

For Chariot of the Gods, you can download my banter cards you can use to kickoff the adventure with nearly no exposition dump! (You can Google around for excellent VTT assets for this adventure too. Look for a full-scale map of the Cronus, or use the Star Trek Klingon Tile Set for interiors, and desaturate them for that Alien vibe). For GURPS fans, I include GURPS versions of the characters, as well as .GCA files for all the PCs and NPCs. Enjoy!

GET Chariot of the Gods Banter Cards

GET Chariot of the Gods GURPS Assets

Do you have any favorite one-shot adventures? Let me know in the comments below!