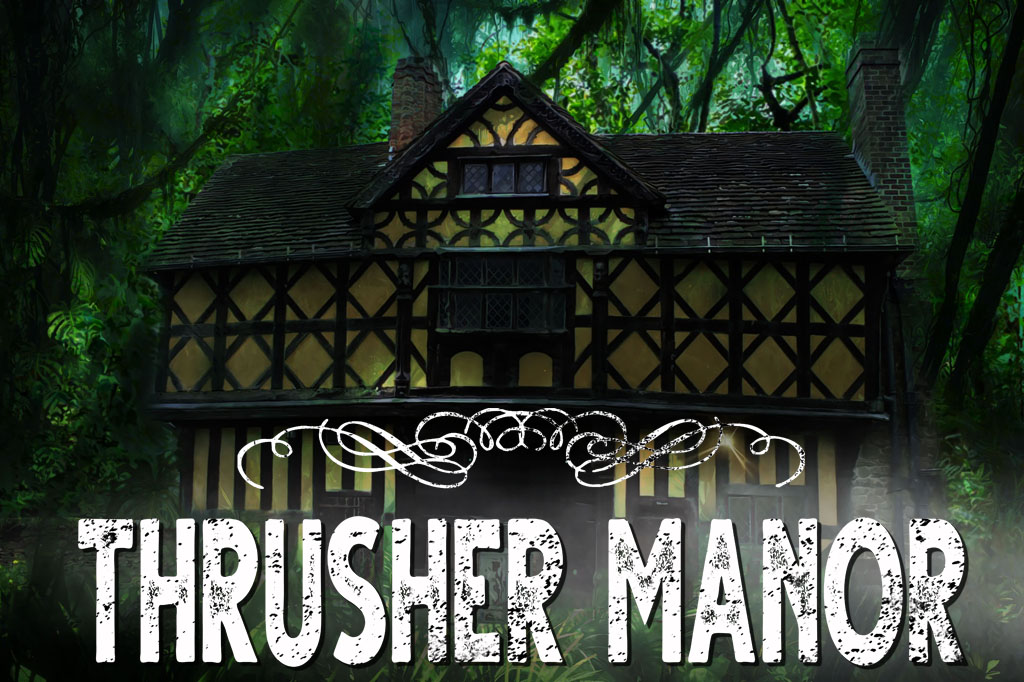 I envy the evil overlords who are about to start construction on their newest dungeon. There are hundreds of fantastic blogs, Reddit threads, and books on how to best construct a world-class dungeon for roleplaying games.

On the surface, haunted house adventures seem a lot like dungeon adventures. Enclosed space, clever rooms, traps, and a big bad to defeat in the end. So this for this month, I tried my hand at writing a good haunted house adventure. Set on an isolated island in 1689, Thrusher Manor is a Jacobean manor full of vengeful ghosts, sinister guests, dark surprises, and an occult past.

After spending months writing (and rewriting) Thrusher Manor, I think I’ve emerged with some decent advice for GMs who want to build their own haunted house:

Start with a Real Floorplan – The best haunted houses feel like real houses, versus a dungeon with carpet and wood trim. Fortunately, there are tons of floorplans of old houses on the internet. Steal one of them so that your house instantly feels lived-in.

The House’s History is Everything – Everything in the house should tie back to the event that made it haunted. Use your floorplan and write notes all over it. Where did the first murder take place? Who did each bedroom belong to? What is that unusually shaped room near the kitchen?

Unlike a dungeon adventure, it’s okay if the “ordinary” rooms outnumber the “exciting” ones. I think a good haunted house only has about a third of its rooms deeply tie into the horrible event that cursed the place. Consider including a “safe spot” or two in the house – someplace the murderous ghost or serial killer won’t go for some reason – so PCs have a place to gather when things get too crazy (which you can use against them in the finale).

Also, because history is so essential to a haunted house adventure, consider starting the adventure before the PCs walk into the house. This gives you more opportunity to establish the history of your house before the players walk into it, spread spooky rumors, and build expectations that you can subvert later. “There’s a dead body in that basement, I swear!” (and then there isn’t…).

The PCs Should Not Be the House’s First Target (Bring NPCS!) – In the movies, by the time the heroes arrive at a haunted house, it has already terrorized (or murdered) some poor locals. While a brave GM might arrange some kind of flashback sequence to setup the creepiness of the house, my advice is to simply bring NPCs along into the adventure to perform victim duties in real-time.

NPCs serve triple-duty in a haunted house adventure. First, they are great for imparting the house’s history to the players (“That painting there, that’s Bloody Anne herself!”). Second, NPCs can drive the plot forward in a natural way when PCs miss clues or overlook details that are important in mystery adventures (“Hey, mister! I found this creepy book in the library!”) Finally, they can fall victim to your haunting’s machinations long before the PCs are truly in the crosshairs. Hearing Billy getting murdered in the basement by a giant spider is far more effective than attacking your PCs with one. Locking a player in the attic is creep, but locking her in the attic when Billy starts screaming downstairs is anxiety-inducing. In Thrusher Manor, I made sure all of the NPCs are utterly expendable after the first third of the adventure (and so far, I’ve only see one or two survive the whole thing).

Embrace the Sandbox, Give Multiple Motivations – Because of the open layout of most houses, it’s difficult to plan a clear beginning, middle, and end to your haunted house adventure. While “survive ’til dawn” works fine in the horror movies, this kind of simple objective creates herd-like player behavior in an RPGs. And it’s hard to pick off people in herds, which is key to any good haunted house story.

Instead, give each PC their own, custom objective on top of the larger goal. Maybe one PC wants to prove that ghosts are real. Another is looking for the hidden treasure in the house basement. A third just wants to romance the cheerleader. Then, scatter clues, history, and horrific events that tie into these objectives all throughout the house. This kind of arrangement virtually guarantees that the PCs will separate from each other at points of the adventure – even if only by a room or two – better enabling your haunt to terrorize the PCs.

Items Are Key to Telling Your Story – In a haunted house, physical items are often the best way to reinforce the history of the place. Set up the existence of special items early in the adventure, so when they are found, it immediately creates tension. For example, if an NPC tells the PCs at the beginning of the adventure “The last thing I saw when I ran from the house was this golden-haired doll…” they’ll be on edge until they finally find it.

Flavorful but useless items also help add to the backstory to the house. For example, in Thrusher Manor, I placed convict-style placards throughout the house – “Ignorant and Stupid”, “Vile Backstabber”, “Sinful & Treasonous”, etc. While these were not key to the plot of the adventure, it immediately gave the players the feeling that the house’s prior inhabitants were awful people who liked making fun of each other.

Similarly, one GM on Facebook told me he loves using mirrors in haunted houses, because he can show horrifying images of the past to his players.

Get THRUSHER MANOR (Call of Cthulhu)

If you run Thrusher Manor or play in it, all that I ask is that you let me know what you thought and how it went! Comment below or tweet me @SageThalcos

Related: More historical horror… this time, in the ice age!