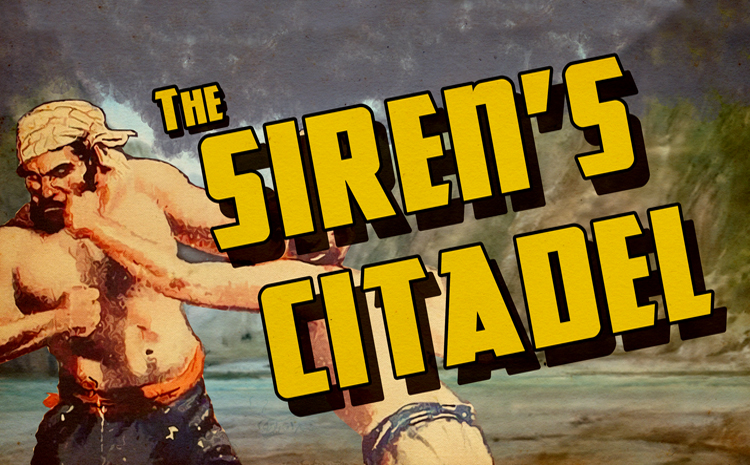 Vacations with Pirates – The Siren’s Citadel

One-shot RPG adventures are great for players and GMs. For players, one-shots offer a chance to try something new — a new genre, different character types, or even a hot new RPG system.

One-shots also offer fresh opportunities for GMs and can recharge the creative batteries. Adventure authors approach pacing, threat levels, and scene descriptions entirely differently. Without the ongoing expectations of a campaign, players behave differently, which challenges GMs in fun new ways. And finally, a one-shot might teach you that you’re really good (or bad) at GMing certain genres.

Years ago, after a long fantasy campaign, our group wanted something new. I was one of two rotating GMs, and we each had a different idea of what new kind of genre we could run to give everyone a break. We argued back and forth between cyberpunk and swashbucklers. Folks were passionate… so we split the group in half and ran both.

Neither campaign lasted very long, but the break was much needed. Players and GMs came back together a month or so later recharged and ready to dive back into fantasy.

My co-GM who ran the cyberpunk game learned that his players really enjoyed tough, non-nonsense fights. Cyberpunk is a dangerous genre, and the players loved the tense action. We injected this sense of danger — being outnumbered and outgunned — into our fantasy campaign with great success. He also learned that cyberpunk was a tough genre to run. Lots of contained urban spaces and similar character archetypes made it really hard to come up with new cyberpunk ideas every week.

When I ran my swashbucklers game, my players told me they loved having a ship and a sandbox to play in. They liked the freedom that came with sailing the Caribbean and following rumors and leads. As a GM, I learned that it’s hard to put individual characters in the spotlight when there weren’t as many diverse character types vs. fantasy games. Finally, we ALL learned that RPG systems are terrible at handling ship-to-ship combat, and we were disappointed we couldn’t make this work better in our game.

All were terrific learnings that made us better GMs and players! By the time the mini-campaigns fizzled out, we returned reinvigorated for our fantasy game.

(And here’s where I ask if anyone has successfully run a long cyberpunk campaign or found a ship-to-ship combat ruleset they love in an RPG… let me know in the comments below!)

This month’s free adventure returns to my nostalgic “sojourn” with pirates. The Siren’s Citadel is a swashbuckling adventure set in 1689. Fresh off a disastrous privateering expedition, the heroes are stranded on the island of Nevis and pressured to perform a dangerous hostage exchange for the desperate English governor. The PCs soon end up in a race to discover the island’s mysterious Secret Citadel, where they are drawn into one of the world’s most scandalous events…

I wrote The Siren’s Citadel thinking about the lesson’s I learned from my swashbucklers mini-campaign:

Alas, there is not ship-to-ship combat in this adventure. Ah well… one day!

While creating The Siren’s Citadel, I discovered a few things worth sharing:

What lessons have you learned from your one shot exploits? Let me know in the comments below…

Get THE SIREN'S CITADEL (GURPS Swashbucklers)

Get THE SIREN'S CITADEL (5E)

Get THE SIREN'S CITADEL - VTT Assets

And if you want to find out more on my thoughts on how to run a great pirate adventure, check out my YouTube video!