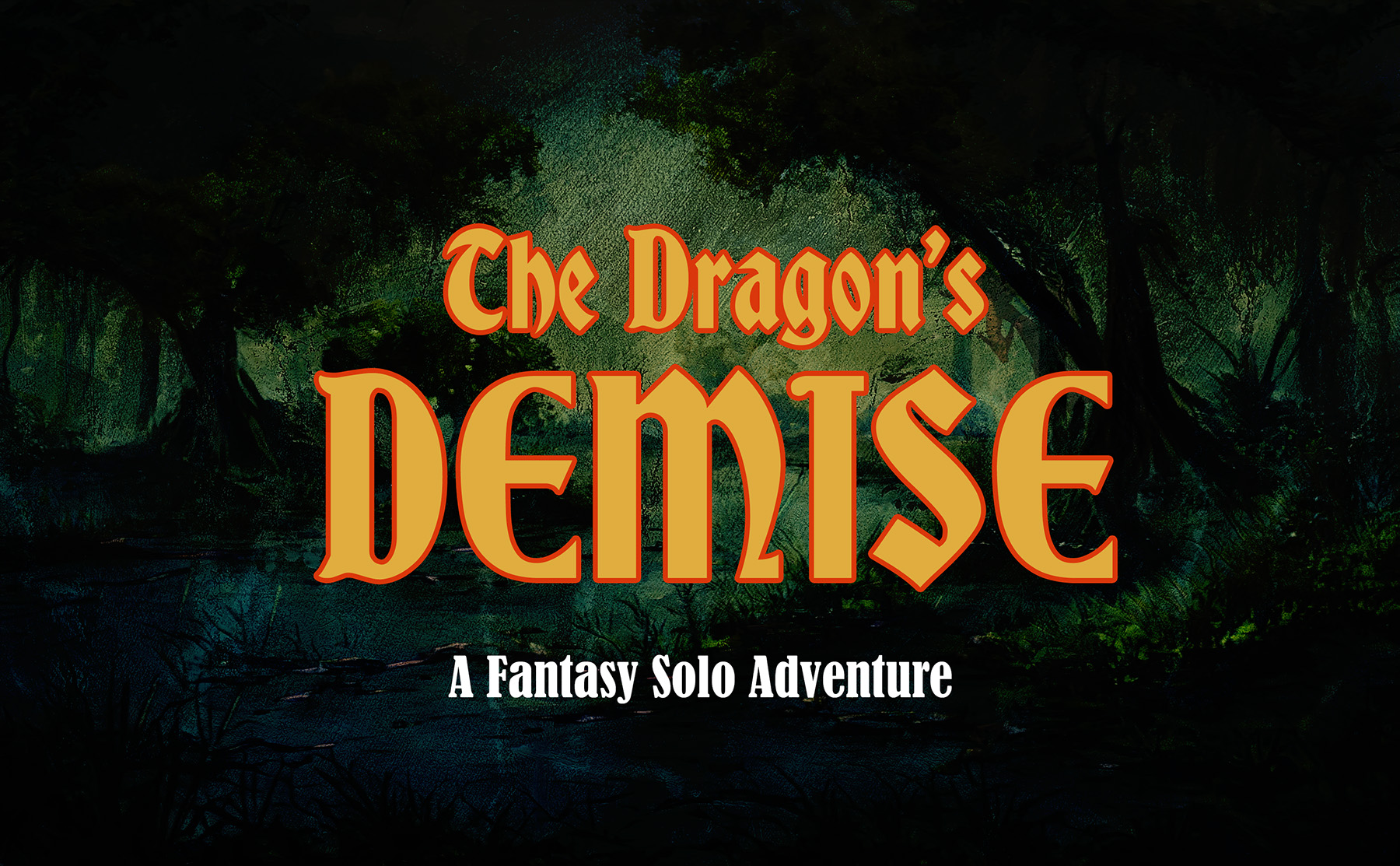 The most popular entry on this blog has been my solo adventure, Beyond the Vale of Madness. The fact that I launched it in March of 2020, just as COVID was rearing its ugly head, probably helped.

So this month, just as we are seeing a glimmer of hope that we can soon return to the actual table with friends, I decided to write a second solo adventure – The Dragon’s Demise, which you can download below for free (for both Dungeons & Dragons and GURPS).

Writing solo adventures is like navigating an actual fantasy adventure. It starts straightforward, then twists and turns as the branching paths multiply. Make it all end properly is like fighting a many-headed hydra — every path you finish, two more branch out.

Lessons for the Tabletop

Solo adventures and “real” multiplayer adventures are very different art forms. Solo adventures lack real agency, don’t go deep into game mechanics, and can often be finished in one short sitting. But GMs who study solo adventures will find important lessons that carry over to their tabletops:

Lesson 1 – The Best Choices Have Context

The earliest solo adventures were filled with choices that gave players zero understanding of whether or not their choice mattered. “You can go left, or you can go right.” Players have no way of making this decision wisely. They’ll just pick one randomly and go.

A good solo adventure gives players more context. “You find a remote cabin… but there are signs someone is still living here. Do you stay the night?”

This is a better, more fun decision point. You automatically understand the risks and consequences for their action. If someone comes home, that person might be angry. If you skip the cabin… you might lose an opportunity for rest or reward. There are other inputs to be considered too. Are you wounded and need the rest? Did you hear a rumor about a skinchanger who eats people in this area of the woods?

This lesson can easily be carried over to tabletop games. GMs should avoid “high road or low road choices” and instead give players more information, or at least, an opportunity to learn about the consequences to each choice.

Lesson 2 – Not Everything Should Be Designed for Your Players

Unlike writing a one shot adventure for friends, I really have no clue what kind of character a player is going to bring to a solo adventure. One player might bring a frail wizard, another a Str 19 barbarian. While a good solo adventure throws a variety of challenges at the players, it’s impossible to cover all situations. Eventually, a character is bound to run into a situation where they are screwed.

Great adventures are about ups and downs. A party of heroes is a powerful toolbox, but it’s okay to throw challenges at them where they don’t have the tool they really need. Now, I’m not saying GMs should purposely try to antagonize with their players by aiming at their weaknesses, but, well, actually I am saying that – as long as it happens occasionally and without malice. Stressful situations cause players to get inventive. If your party of fighters and rogues comes across a magically sealed door… they’ll think of something, I promise.

A player wrote me recently telling about his adventure in The Curse of Sekhmet. When faced by well-armed carabinieri soldiers to which they had no real offensive counter… someone in the part whipped out their wallet and bribed them. It was a brilliant end-run, which wouldn’t have happened if those soldiers were perfectly matched for the party.

RPGs are complex! Solo adventures are brilliant for new players because they typically ease them into the mechanics of the game. You don’t have to read 3 paragraphs of lockpicking rules if Entry #38 just says it’s a DC 12 roll to open the treasure chest.

This is an important lesson for GMs too. It’s more fun and engaging to learn new rules and mechanics during the adventure, vs. a big rules dump ahead of time. If GMs have new players at the table, design an adventure that teaches the mechanics a little bit at a time. New thief player at the table? Put a simple locked and trapped chest in the first encounter so they can learn how to do their specialty. Want to teach hit location rules? Introduce a bad guy that is well-armored, but forgot his helmet.

In this month’s solo adventure, players are challenges to venture into a deadly swamp to recover a gem from the belly of a fallen dragon. (And yes, it’s a bit of an homage to Scorpion Swamp, my favorite – and probably the best designed – Fighting Fantasy solo adventure).

Get THE DRAGON'S DEMISE (GURPS Fantasy)

Did playing solo adventures teach you any great GM tips? Let me know in the comments below:

Related: More of the most popular adventures