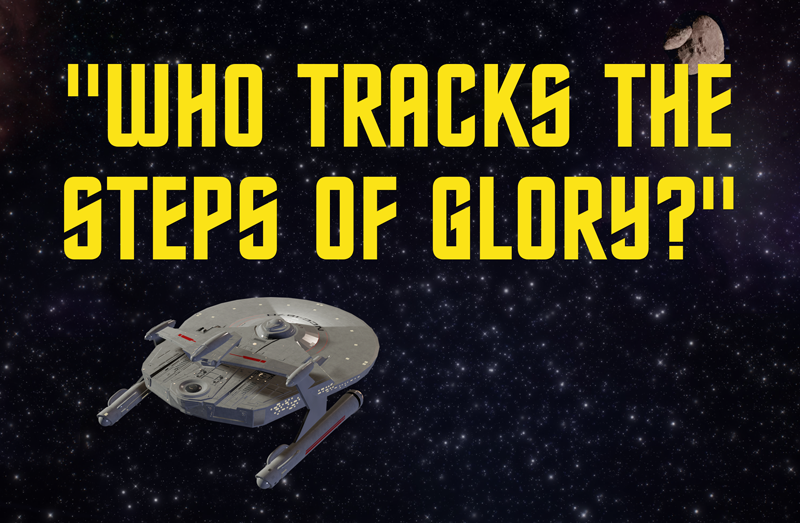 Borrowing from the Past – Who Tracks the Steps of Glory?

FASA’s original Star Trek RPG is underrated, largely because it borrowed so much from other systems. It had a percentile skill system like Call of Cthulhu, a life-path character creation system like Traveller, and a ship battle system that was a simpler Star Fleet Battles. It wasn’t inspirational, but it worked, and it was highly logical.

The game also sold a few dozen TOS-era adventures. I wouldn’t call any of them great, but not because the authors didn’t try. It’s difficult for an adventure to capture the suspense, negotiation, and sheer number of variables in a Star Trek episode — and this was a the dawn of roleplaying design.

One adventure, 1985’s “Where Has All the Glory Gone,” however caught imagination. It had a simple premise — the PCs get stuck in the Romulan Neutral Zone — but was chock full of moments for players to shine. There was room for phaser fights, intense discussions on philosophy, engineering problems, medical drama, and tension built as the hours ticked by. The author John Theisen did a great job capturing the heart of a Star Trek episode.

But old adventures have a lot of problems by modern standards. Key NPCs didn’t always have clear motivations. The adventure’s clock was immovable. Player agency was often thrown out the window to force events into motion at regular intervals. (The adventure even recommends suddenly purging the ship’s memory banks to prevent players from going off the rails!) Finally, there was a lot of cruft used to fill pages – I doubt players ever wanted to intercept a chess game transmission, move by move…

For this month’s adventure, I decided to borrow and reboot the story from “Where Has All the Glory Gone”. My objective was to keep everything that was wonderful about the original, streamline it to run in 4 hours, give the players more agency, and increase the tension. To do that, I made two big alterations:

I Fired the Commander

In the original, the Romulan commander’s plans are pulled from Wile E. Coyote’s playbook. He wants to gloriously destroy the PCs’ ship by luring them near his space station (after it has a radiation accident) and then blowing it up while they are in orbit. But his scheme relies on the players’ total incompetence for it to believably work (even at one point relying on talking too much to entrap the PCs…!).

So I fired this commander, turned him over to the Tal Shiar, and replaced him with a brand new commander. This new Romulan is has been ignored for years and is frustrated. She’s authentically on the fence about what to do with Starfleet arriving at her base. If the PCs treat her like a sneaky Romulan, she’ll act like one. But if the players unleash Picard-level diplomacy with her, she can be talked into a nuanced peace deal, or perhaps even a defection to the Federation. By defining the new commander’s history, rough relationship with her own crew, and long-term motivations, she becomes the biggest wild card in the adventure, and returns agency to the players.

I Killed the Clock

The original adventure has a tightly scheduled timeline of events that occur at very specific times. This was obviously done to make sure that tension ratcheted up… but also severely hampered player agency. There’s a lot in the clock that the PCs likely never witness, and are simply told about afterwards, which just doesn’t work for an interesting session.

To fix this issue, but still keep the feeling of escalation, I did two things. First, I compressed the timeline of the adventure. The original took place over 8+ days. I changed that to hours, which not only tightens the adventure but also ups the tension (and feels more like an episode of Star Trek).

Next, I removed the game clock entirely, and replaced it with plate-spinning. Plate-spinning is when an adventure offers far more challenges than the players can deal with at time. Imagine in a fantasy game where orcs are attacking a merchant caravan. Add to this: in the distance, a barn is burning, and there’s a screaming family stuck inside. And half the caravan guards are fleeing like cowards. And there’s an orc standing on a wagon blowing a horn for his reinforcements to come.

Players can’t effectively deal with all of these events at once. But failing any one challenge won’t doom them. In this situation, the players have to brutally prioritize, or take extra risks to get more done. Maybe the fighter runs over to talk the cowardly guards back into fighting. If it works… maybe they can save the farmers. But if it fails, time is wasted and more merchants die.

Plate-spinning is my favorite way to reinforce player agency. So in this rebooted Star Trek adventure, I made sure there were always multiple challenges happening at the same time. If the player solve one, another is probably getting worse. (And in a Trek adventure, these hard choices creates thematically-appropriate, dramatic vocal debate among the experienced officers.)

I made lots of other minor changes to the original adventure too. The player’s ship gets downgraded to make them feel more like an underdog trapped behind enemy lines. There’s a micro-nebula to explore, new Romulan technology and tricks, and even a planet filled with deadly silicoids. In the end, I felt I made enough changes to retitle the reboot: “Who Tracks the Steps of Glory?”

Do you have any favorite old-school adventures you’ve rebooted? Let me know in the comments below.

Get WHO TRACKS THE STEPS OF GLORY? (GURPS Star Trek)

Get WHO TRACKS THE STEPS OF GLORY? VTT Tokens & Assets

Special thanks to the John Theisen and the original FASA team who paved the path for great Star Trek games, and without which this adventure wouldn’t exist.