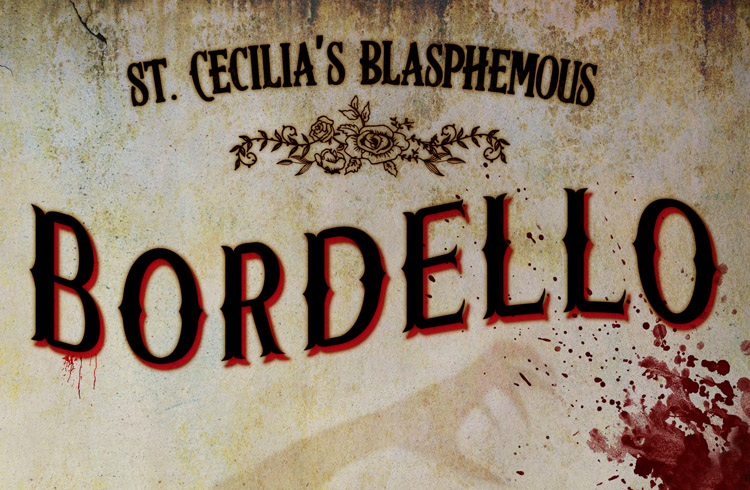 This month’s free adventure is St. Cecilia’s Blasphemous Bordello. It’s a creepy, investigative horror adventure set in the old west. But I’m going to use this adventure to talk about the problem with all modern-era big bads.

The problem is this. With magic and melee deemphasized, the toughest RPG boss can barely last a turn against the heroes. The moment modern heroes see the big bad boss, he’ll be gunned down in a hailstorm of bullets. This doesn’t exactly make for a dramatic ending.

Worse, this problem makes for a bad beginning, because if your villain is vulnerable to a few gun shots, it’s difficult to introduce him early. It’s likely he won’t even survive to final battle at the end.

(This problem does still exist in fantasy games. Lots of DMs have seen their end bosses go down with a few spells, but it’s generally much easier to avoid in low-tech games. Fantasy has protective spells, arrow ranges are limited, and armor can always withstand several blows.)

But in modern day adventures, the GM is a crazy person to present the big bad to the players before the finale.

This “sudden death” problem CAN be solved mechanically. A lot of Hit Points shields a boss from instant death. A narrative system might give the GM enough fortune chips, drama points, or whatever to have the boss avoid fire.

However, I’m not convinced that any mechanical solution is going to satisfy your players. It feels weird to shoot Hans Gruber with a dozen machine gun bursts before he goes down. Too many lucky breaks for your villain is going to start feeling “gamey” and break immersion.

So how do you prevent the Sudden Death issue in modern-era games?

St. Cecilia’s Blasphemous Bordello takes place in the old west, so it has a lot of the same problems as modern games. A Colt Army revolver is going to take someone out pretty fast. To help set up a better villains, I used some of these tricks.

In the adventure, the PCs discover that a dastardly villain — the Candleman — is behind some unusual attacks in town. I wanted the Candleman to be a creepy, but unassuming, regular guy. He’s dangerous, but I designed him to be in the background for most of the adventure. But I still wanted to have him live long enough to creep out the players with his occult activities.

To help with this, when the PCs finally meet the Candleman, he’s not armed. He’s skinny, alone, unlikely to try to fight. When I ran this adventure, the PCs took the time to talk to him, threaten him, and question him before finally taking him out. But even though he’d only take a bullet or two to take down, the encounter with him was tense and creepy.

Next, I gave the GM lots of options for adding complexity to the adventure’s action-filled ending. No spoilers here, but the PCs conclude the adventure by fending off a dangerous, netherworld spirit. However, if they are well-prepared, it’s likely this final boss has the same problem as other modern-era bosses — one or two good shots can take him out.

To help with this Sudden Death problem, I gave the GM several options to add complexity to this encounter, in the event the PCs really are that organized. I provided options to add innocents into the mix, a surprise ambush, and other hazards to make sure that even if the final boss does go down in a few shots, the day isn’t won yet.

I had fun writing this adventure. Old west horror was the very first adventure genre I posted to this site, and it was a blast returning to a genre I’ve already covered.

If you want to watch a summary of the adventure along with some tips how to run it, check out my YouTube channel:

In St. Cecilia’s Blasphemous Bordello, a small town’s famous bordello was suddenly shut down and purchased by a group of nuns – who promptly reopened the site as an orphanage. A few weeks later, the old bordello has become the site of two ghastly decapitations. Not having time to get involved, the sheriff asks the PCs to help. Soon, they discover the existence of a horrible entity created through the town’s anger and shame.

This is the first adventure to include an audio track to kick off the adventure. Do you GMs actually use this sort of thing? Let me know in the comments below…