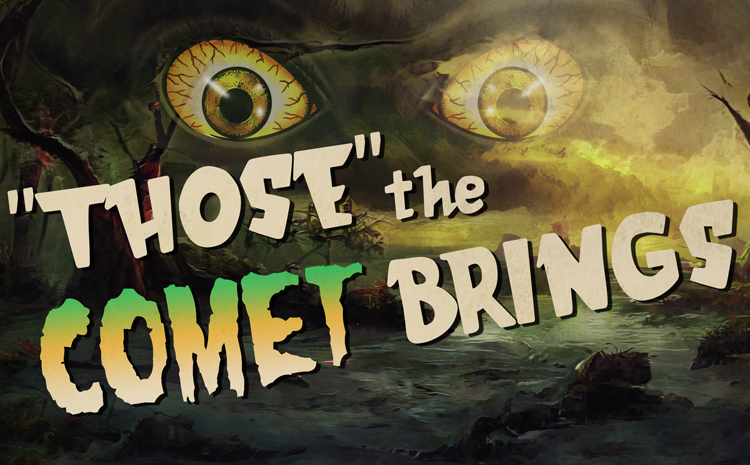 Keeping it Simple – Those the Comet Brings

If you ask Call of Cthulhu fans to list their favorite horror adventures, Dead Light is guaranteed to be in the top 10. It’s been described as a “quintessential” horror adventure.

I won’t spoil the adventure for those of you haven’t played it yet. But the back cover advertises it as an adventure about surviving a single night. Trapped by a storm, the PCs are stranded away from civilization with something out there in the darkness. If you’re a fan of Alien, you’ll like Dead Light.

What strikes me about Dead Light is that it’s such a simple setup. While the adventure setting is evocative, the plot is simple, the enemy is singular, and the only real twists and turns are the ones that the Gamemaster and players create together.

I was inspired by Dead Light‘s constraints, and set up similar ones for myself when I wrote this month’s free adventure – Those the Comet Brings. I wanted the location of the adventure to be tight and moody, the foes to be small in number, and to only have a couple of NPCs for the players to deal with. Basically, I “built” the adventure with an indie movie budget.

To make sure I landed in a place that was different from Dead Light, I set Those the Comet Brings in 1951. The characters are (mostly) teenagers heading to the Jersey Shore for some sun, waves, and beer. Suddenly, strange radiation brings their car to a halt in the Pine Barrens… and they stumble on to a horrible scene involving dead bodies, a mysterious meteor, and dangerous creatures from another star. Although I didn’t intend it when I started writing the adventure, it really ended up with a 1950s creature-feature vibe! Cue the actor in the rubber suit…

So are constrained, straightforward adventures better than ones with more locations, characters, and plot hooks? I think they have pros and cons:

Realizing that the last issue might be a problem, I designed around it in Those the Comet Brings. The creatures that stalk the PCs literally need to recharge their abilities at a specific location after using them. This way, I have a solid reason as a GM to have them retreat, and a tool to keep the PCs alive for longer stretches of time. When I ran it, not only did this help me pace the adventure, but it gave the players another tool to use against the monsters.

If you want a quick overview of the adventure with more stories about how this one played out, check out my YouTube overview:

Get the FREE adventure here!

Download the free adventure for both Call of Cthulhu and GURPS Horror here:

Get THOSE THE COMET BRINGS (GURPS Atomic Horror)

Get THOSE THE COMET BRINGS (GURPS Atomic Horror) - Printer Friendly

Get THOSE THE COMET BRINGS (Call of Cthulhu)

Get THOSE THE COMET BRINGS (Call of Cthulhu) - Printer Friendly

Get THOSE THE COMET BRINGS (VTT Tokens & Assets)

What simple, constrained adventures have you enjoyed? Let me know in the comments below!