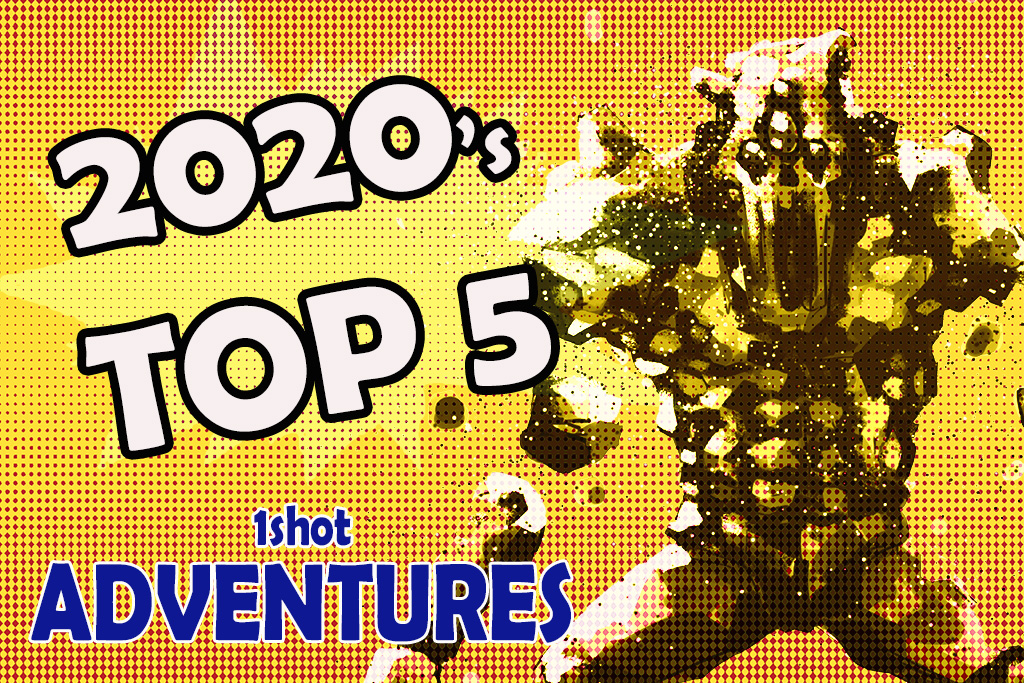 It’s been a busy 2020 on the 1shotadventures blog! This year, 9 new free adventures were published for systems ranging from D&D and Call of Cthulhu to GURPS and Savage Worlds.

Special thanks to everyone who gave me feedback or dropped a note to here or on Twitter. I originally started this blog because I ran games at conventions and always had a lot of leftover artifacts — premade characters, handouts, and outlines of the adventure. I wanted to do something with all that stuff and help GMs kickstart their own adventures.

Of course, this year I haven’t been able to hit the convention circuit, but I’m still passionate about sharing my work with any GMs who want to run a game for their players without a lot of prep. So for those of you who sent me feedback — THANK YOU!

Here’s this year’s 5 most popular adventures (by downloads):

1930s pulp action took the number five spot. In The Curse of Sekhmet, the PCs chase a notorious bank robber across fascist Italy, heroes stumble into the plans of a desperate society of global conspirators, and end up tomb raiding across Egypt.

This adventure has one of my favorite openings, and lots of GMs wrote me and told me great stories of their players hanging on to the wing of an airplane while getting shot at by mafia gangsters. Learn more.

Historical horror was a popular genre this year, taking three of the top five spots. In the 17th century Thrusher Manor, the PCs are dispatched to the private island of St. Médard, where an exiled duke has seemingly gone missing.

I think this adventure has some of the best handouts. Also, the GMs who played this always have radically different endings to this adventure – I always get a laugh at how the conclusion seems to play out in some very different ways. Learn more.

Almost thirty years ago, a friend challenged me to write an adventure set in the ice age. I rolled my eyes, wondering who on earth would want to play primitives with nothing more than spears and slings. Well, the Lovecraftian ice age horror Canyon of the Stone Cairns was the number three adventure on my blog this year!

In this adventure, the PCs witness their tribal leader captured by a mysterious, rival tribe. Fearful that their tribe will be doomed without his leadership, they set out to rescue their chief in the haunted Forest of Howling Sorrows. Learn more.

The Mound in the Yard is an homage to the old 80s serial killers. Tackling this genre was HARD – special thanks goes to the folks on rpg.net who had advice for how to construct an adventure where a serial killer stalks the heroes, without it turning into a single bloody encounter.

Taking place in rural Tennessee in 1981, the PCs are asked to investigate the appearance of several, bone-ridden, dirt mounds that erupted in the backyards of Nolens Gap , causing a local man to go mad and die. This investigation-heavy adventure lets PCs uncover the town’s decade-old secrets and prevent the return of its most notorious killer – “Longhandle.” Learn More.

#1 – BEYOND THE VALE OF MADNESS – Solo Adventure!

Unsurprisingly, a solo adventure took the top spot in 2020. In Beyond the Vale of Madness, a lone hero ventures north into the freezing wastelands of the north, looking to confirm the rumor of a mysterious castle appearing once every seven years.

I adapted this adventure from the defunct, unpublished RuneQuest Slayers game I wrote back in the 1990s for Avalon Hill. I’m glad so many people got to enjoy it after so many years (reappearing much like the namesake castle itself…). Learn more!

And that wraps up 2020! I have more adventures in progress, including some brand new genres. Sci-fi has been one of the biggest asks this year, so I’ll try to get to get some coverage there in 2021.

I also plan on adding more VTT assets to the adventures, as that’s been a steady theme this year. When I first started this blog, nobody asked for VTT assets – now, VTT assets are critical to helping adventures get played. (For GURPS players, the last two adventures include .gca characters so you can import them into Foundry or other VTTs. Over time, I’ll be going back through the adventures and adding them to all of them.)

Thanks again to all my fans who have supported this blog. As always, you can reach me here or on Twitter. Keep up the tabletop gaming in 2021!