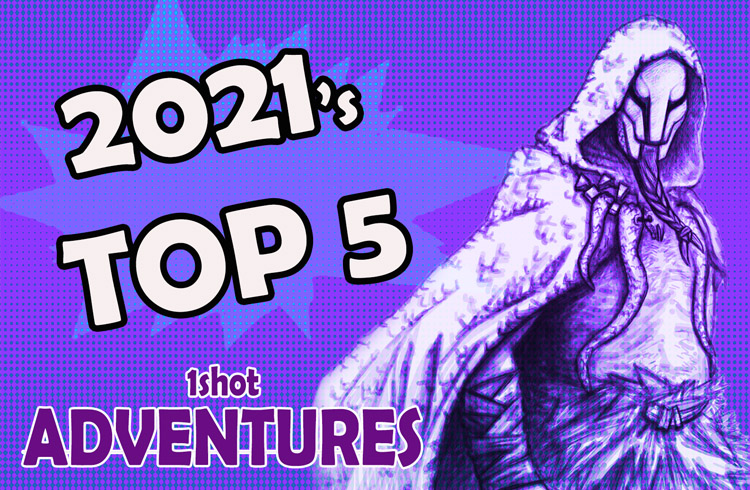 I started this roleplaying blog over two years ago now! My mission has always been to make it as easy as possible for GMs to run an fresh, new adventure for their friends. As a result, I created this blog to give GMs an easy way to do something new, whether it’s run a game for new players, introduce their group to a new system, or explore a new genre.

This year, I released 8 new adventures, bringing the total to 20+ free adventures on this site! So which ones were the most popular – at least as judged by downloads? Let’s dive in to the top five for the year…

After watching some old Bond films, I was inspired to write this 1960s-themed spy adventure. I loved writing an adventure set in faraway ski slopes, cruise ships, and European cities. Those exotic, modern settings unlocked a lot of new set pieces I hadn’t thought of before.

In Never Forget to Die, the Soviets have sourced a powerful amnesia drug from a secretive inventor. After months of searching, MI:6 has discovered the middleman for the drug. Brave agents must parachute on to a luxury cruise ship to find the name of the inventor. From there, they are embroiled in a global race with the KGB to find the scientist and stop him from selling the drug…

Never Forget to Die was the first time I converted one of my modern adventures to a 5E-based system – I usually lean on GURPS or Call of Cthulhu for that. Black Cats’ The Spy Game does a great job making it easy for D&D gamemasters to run a modern day adventure. I’m not 100% sure it captures the feel of modern action (with gun-toting heroes having a lot of hit points), but if you’re a big fan of 5E and want to try a new genre, give it a go! Learn More

Slashers get almost no love in RPGs. In the movies, they rely on bad decisions by the protagonists and camera sleight-of-hand to really work. My theory writing this adventure was that slashers can work in an RPG… if the players have no idea they’re in a slasher movie.

In 1981, a small rural town in Tennessee experienced unexplained phenomena. Several bone-ridden, dirt mounds erupted in the yards of its residents, causing a local man to go mad and suddenly die. This investigation-heavy adventure lets PCs uncover the town’s decade-old secrets and prevent the return of its most notorious killer – “Longhandle.”

Folks have told me they have turned the Mound in the Yard into an entire campaign. That surprises me because I’ve always been able to run it in one or two sessions! But if you like small town, slow-burn investigation with little-to-no supernatural elements, you’ll enjoy this one. Learn More or watch the YouTube summary.

This medieval horror adventure pulls from heavily from German folklore. I was inspired to write it after thinking back to how much I enjoyed the old-school PC RPG, Darklands. To write this one, I did a lot of research – I read a whole history of medieval Germany and supplemented it with Schonwerth’s Bavarian folktales (which get downright weird…)

Set in 15th century Germany, the PCs discover that an insidious witch has taken vengeance against a powerful bishop and his illegitimate son. Forced to find the bishop before the witch strikes again, the PCs must travel a dangerous road infested by outlaws, traitorous rebels, and bizarre creatures from folklore.

This adventure had a huge contribution from Rua, a fan who took the time to convert the entire adventure into Chinese, which I made available on this site. It’s awesome to see how global RPGs have become. I also recently updated this adventure with VTT maps and a low-magic port to D&D 5E! Learn More

#2 – Those the Comet Brings

Brings? Bring? Brought? This question kept me up late at night, and I still got it wrong the first time.

Those the Comet Brings is an homage to those old 1950s science fiction horror movies. It’s a tight adventure – A car full of vacationing teenagers comes to a crashing halt in the New Jersey Pine Barrens… and they stumble on to a horrible scene involving dead bodies, a mysterious meteor, and dangerous creatures from another star.

This adventure was wonderfully brought to life at Halloween by the Arkham Files podcast. The gamemaster, hysterical players, and professional sound design combined to make it feel like I was listening to an actual, lost 1950s movie. Take a listen! Learn More or watch the YouTube overview.

Historical horror claims the top spot! In the 17th century Thrusher Manor, the PCs are dispatched to the private island of St. Médard, where an exiled duke has seemingly gone missing. Thrusher Manor is probably one of the densest adventures on this site, with lots of NPCs, an important backstory, and setting that requires players to think their way through it. (And I still think this adventure has some of the best handouts.)

Thrusher Manor was streamed live on Twitch by RedDirtDND. They skillfully ported the adventure to high-level D&D and somehow kept it on the rails. This surprised me, as I always thought magic spells and abilities could easily ruin a contained horror adventure, but it worked! Learn more.

…and a Shoutout to the Solo Gamers

Honorable mentions go to both of my solo adventures, The Dragon’s Demise and Beyond the Vale of Madness, which combined got 8,000+ downloads. Given the popularity of horror on this blog, I might give a Lovecraftian solo adventure a go next year.

Last year, I promised I’d bring more science fiction to the site… and other than Those the Comets Brings, I didn’t do so great at futuristic content. Sci-fi is still a popular request, so I’ll try to do better next year.

However, I also promised more VTT assets in adventures, and I think I’ve done better. More and more adventures include maps, and GURPS players get full characters of .gca characters to import into FoundryVTT or another VTT. I’ve even gone back and updated some of the most popular adventures, including my pulp adventures, my first adventure The Black Mine of Teihiihan, and more.

5E, Call of Cthulhu, and GURPS are the most popular systems on this site (in that order). I know you Savage Worlds players have been asking for ports of some of these adventures, too. If any Savage Worlds fans wants to help, let me know. I just don’t know the system good enough to feel like I can do it justice.

Thanks again to all my fans who have supported this blog and my YouTube channel. If you have any ideas for adventures or genres I should cover, you can always find me here or on Twitter. Happy holidays, happy new year, and go roll some dice with your friends!

Related: Check out last year’s top list and see how it compares!