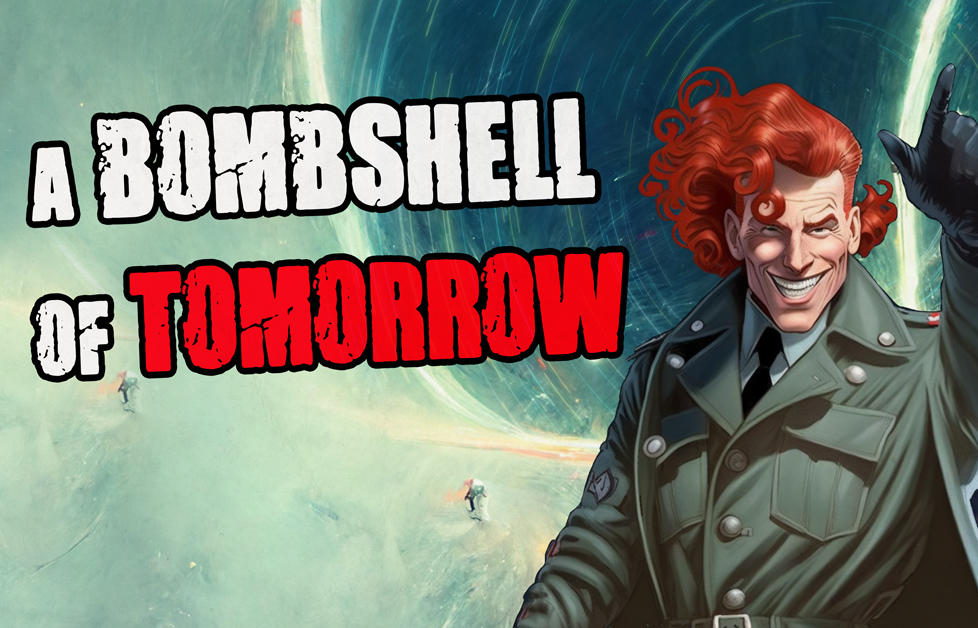 The Unthinkability of Superhero Adventures – A Bombshell of Tomorrow

It occurred to me recently that the best, most classic RPG adventures come from a small handful of genres. Fantasy has a dozens of classics, horror has even more, and even science fiction has some fantastic ones, especially if you count the Traveller and Star Wars D6 ones.

One genre that clearly does worse than the others is superheroes. I literally couldn’t think of a superhero adventure that I would think of as being “classic”, one where if you mentioned it to most other TTRPG fans, they’d go “oh yeah, THAT one is great!”

At first I figured that I must be wrong, that surely I was forgetting some classic Champions or TSR Marvel Super Heroes adventures (which is still quite possible). But then I spent a few hours searching reddit and dedicated RPG fan sites… but came up empty. When it came to superhero adventures, I found very little fans were strongly recommending. And then I recalled that years ago, when I ran a long-ish Mutants & Masterminds campaign, I also struggled finding good premade adventures, and mostly relied on my own adventures, with mixed results.

Is the genre cursed? Or, is it just hard to create an amazing superhero adventure, even in an age where we are surrounded by of 30+ Marvel films, a soon-to-be-rebooted DCU, and dozens of high-quality superhero tv shows?

Here’s the answer: creating great superhero adventures is a wicked hard problem. Why?

When you read this list you start to realize that superhero adventures start to look like those epic, 20th level D&D adventures… which are also exceedingly rare for a reason.

A Bombshell of Tomorrow

This month’s adventure, A Bombshell of Tomorrow, is my first real attempt at a superhero adventure on this site. (I’m not going to count Minutes Not Hours since that mostly played out as a modern action game with some superpowered PCs.)

Nominally set in the DC universe, the heroes are charged with stopped the chronal duplicate of a time travelling Nazi scientist, who may have found the secret to triggering World War III. From a temporal invasion in the city part, to a secret Siberian prison, and then to a hidden base in the Pacific Northwest, A Bombshell of Tomorrow embraces most of those tropes I mentioned above, while trying to ease some of the issues with two philosophies:

Each encounter in the adventure is set up as a sandbox, which means that there are challenges, obstacles, enemies, and complications, but the PCs get to choose how to handle each one. In act one, for example, the PCs must stop a temporal invasion, with time traveling Nazis swarming the city park. There are tanks, bombers, infantry, etc., but the PCs only have to hold their own to win the day. When I played this, my weaker heroes were doing crowd control, saving civilians, and tracking all the German bombers, while the heavy hitters went toe-to-toe with some tanks. There was enough for everyone to do, that it worked. I took a similar approach on the next two acts — infiltrating a hidden Russian prison, and sneaking on to an island to rescue someone before the villain knew what was going on. Each scenario had multiple paths to winning — and I think this is critical to a good superhero adventure.

The Villain Has Duplicates

Okay, this one is a cheat. But I purposely chose a villain who had chronal duplicates running up and down the timestream. This guaranteed that my PCs would encounter him in each act. The first one where he is guaranteed to escape (only because the adventure starts with him mostly off the board), but leaves behind his trail of minions, the second one where the PCs have the rescue a version of him from a Russian prison, and the third one where finally confront him. This guarantees that the supervillain will always be on the player’s minds, and be (likely) impossible for them to defeat early on.

To make it easier to run, I kept the adventure medium power level — i.e., it’s not really designed for superheroes that can toss buildings. I figured if GMs want to run that kind of adventure, they are probably confident enough in their own ability to scale up the adventure by adding more challenges and supervillains.

Because I enjoy third-rate villains in my one-shots, the GURPS version also includes more Suicide Squad characters, including Killer Moth, Madame Crow, and Zebra-Man. Everybody always fights over Zebra-Man.

You can download A Bombshell of Tomorrow for free here.

Get A BOMBSHELL OF TOMORROW (GURPS)

Get A BOMBSHELL OF TOMORROW (GURPS) - Printer Friendly

Get A BOMBSHELL OF TOMORROW (M&M)

Get A BOMBSHELL OF TOMORROW (M&M) - Printer Friendly

Get A BOMBSHELL OF TOMORROW (VTT Assets)

Also, if you think I missed any classic superhero adventures, let me know in the comments below. I would love to check them out.

*By the way, if any Marvel fans ever want to help me port this adventure to the MCU, let me know. I love Marvel dearly, but am not as familiar with the universe to feel like I could get it right.