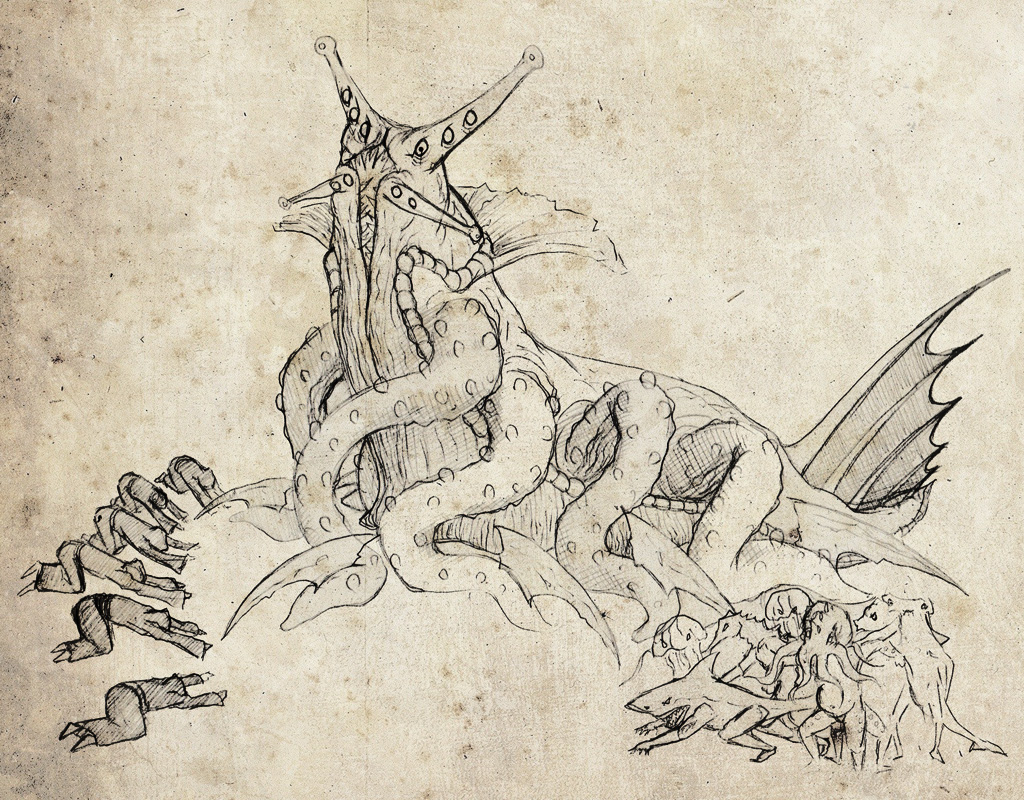 One of my favorite H.P. Lovecraft stories is “The Temple”. It’s a straightforward but moody account of a German submarine crew dealing with one horrible problem after another – a cursed item, an engine malfunction, mutiny, madness, suicide, and then finally its lone survivor staring straight into The Impossible. It has all the hallmarks of the Lovecraftian horror genre – in a measly 5,000 words!

This month, I worked with a friend to write a RPG adventure sequel to “The Temple.” Mimicking an author’s specific style and finding the right balance between homage and uninspired copycatting is one of my favorite challenges in adventure design (which I’ve written about before).

I’ll avoid the hot debate over whether Call of Cthulhu adventures ever accurately tap into Lovecraft’s ennui, and instead talk about something else that challenged my sanity — a total pivot away from my original vision for this adventure.

When my friend Jeff and I sat in a coffee shop to think about how we’d sequel “The Temple” we immediately landed on ideas I thought were obviously brilliant. Twenty years after the events of the story, the investigators would be hunting for the stranded U-29. Of course, they then find themselves in a similar precarious situation as the original story. They’d be trapped underwater, in a forgotten city, surrounded by eldritch foes, with time (and oxygen) running out. It was like Aliens to the original Alien. Easy!

But by the time I finished writing the adventure, it was nothing like that description. Now, most of the adventure takes place on an island in the Azores. The main nemesis is a Portuguese taxi driver. The U-boat isn’t even underwater. And there are Nazis.

So how did I utterly bail out of the original idea and get to this radically different take? I devised three Danger Signals that might tell you it’s time to pivot your concept:

When faced with all three Danger Signals, I massive pivoted the adventure so that only the first act takes place in the original underwater setting, looking for the vanished U-29. The adventure moved to the Azores, mysteriously infected by the disturbance in the temple, complete with an open-ended harbor to explore, interesting personalities, and some horrific surprises. I think this new concept works better, and actually serves as a more interesting sequel to Lovecraft’s work.

It also would have been possible to avoid the Danger Signals by changing other aspects of the adventure. I could have ignored the limitations of 1930s technology and given Freedom of Movement with more-modern equipment. I could have loosened the genre and headed straight towards pulp, maybe filling the final temple with air, giving the PCs some big guns, and playing out like the finale of the The Mummy (now with Deep Ones). I like my new ending better, but my point is the same – if you see multiple Danger Signals in your adventure, rethink and pivot.

What do you think? What other Danger Signals are there?

If you run the adventure or play in it, all that I ask is that you let me know what you thought and how it went. Tweet me @SageThalcos