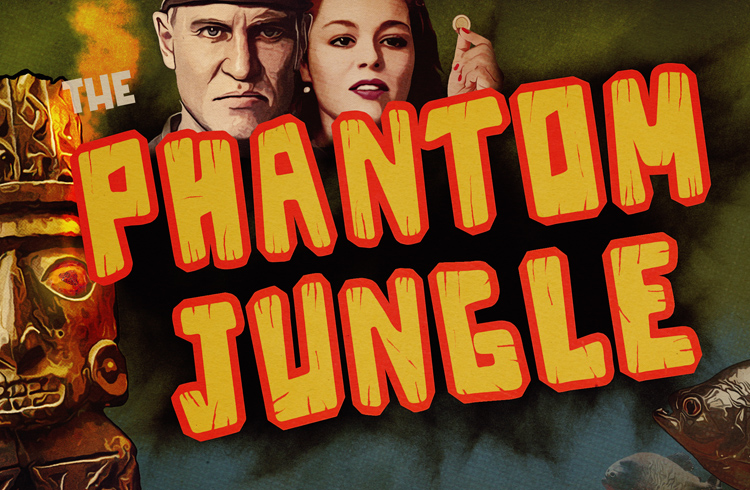 Motivating Players in… The Phantom Jungle

Those of you who have read this blog know that I’m a big fan of cliffhanging pulp action. I think it’s one of the best genres for one-shot adventures — exotic locales, big villains, and fast-paced action! Plus, players are already familiar with the conventions, since it takes place in the real world and everybody has seen a movie like Indiana Jones or The Mummy, or played Tomb Raider or Uncharted.

This month’s adventure is The Phantom Jungle, the third in a loosely-connected “trilogy” of free pulp adventures. You can download it for free at the end of this post.

I tend to design action adventures by first inventing the set pieces. For The Phantom Jungle, I knew I wanted a brawl on a boat over a piranha-infested river, an encounter with an albino jaguar, an old Confederate ironclad that needed to be infiltrated, and — of course — an ancient temple filled with deathtraps. Lots of fun, pulp stuff for the players!

A problem with a set piece-first approach is that this method doesn’t give the players adequate motivation to go from one place to the other.

Evidence of this problem is in Death on the Reik, part two of Warhammer Fantasy Roleplay’s classic The Enemy Within campaign. I just ran this adventure for a group of players, and was shocked at how the set pieces were strong and memorable, but the motivation to travel to each one was paper-thin. Death on the Reik includes a dozen or so A+ tentpole encounters, but sort of assumes the players will stumble their way to each of them. If the players are lucky, they’ll get one flimsy clue to lead them to the next location. The work for me as the GM was brutal to connect these, as proven by my many Reddit post asking experienced Reik GMs on how best to push my players along. Thank you Reddit for the help and emotional support.

So having just learned the lessons of lack of motivation the hard way, I tried to address this issue with The Phantom Jungle. In fact, I may have been too heavy-handed, but you can blame Etelka*

To kickstart The Phantom Jungle, I relied on an old but effective trope. One of the PCs’ father desperately needs help, and he’s in a far off city in Brazil. Rescuing dad is clear personal motivation. Personal motivations can be harder in a one shot adventure, but I think players generally accept and enjoy personal motivations that are fairly uncomplicated. “Rescuing a parent” is easier than convincing players they need to avenge the death of a long-lost, second cousin.

Once the PCs are stranded in the jungle, they stumble into a leper colony, where its saintly doctor has been kidnapped. The poor, sick patients are in big trouble without their miracle-working doctor, and they beg for the PCs to find her. This is clear social motivation.

Finally, at the end of the adventure, the PCs discover that a nefarious, power-hungry villain is obsessed with breaking into an Incan temple and resurrecting his traitorous great-grandfather. This villain is a jerk and a bully, oh, and he regularly gets gold from the Nazis. This is a classic Big Bad motivation.

The Phantom Jungle combines all three types of tried-and-true RPG motivations. While it may seem like overkill, this worked well in action. Some players are more motivated by personal quests (“save my father!”), others by social impact (“save the sick people!”), and others by strong villains who they just want to fight and defeat (“let’s kill ’em!”). On balance, I decided I’d rather give the GM more tools than they need to make sure the players want to actually go to the next fun set piece.

I’m positive that there are many more motivations, and some are specific to genre and play style. Which kinds of motivations work best for your group? Did I use too many here? Let me know in the comments below.

If you’d like to watch a video overview of The Phantom Jungle, check out my YouTube channel!

Get THE PHANTOM JUNGLE (GURPS)

Get THE PHANTOM JUNGLE (Call of Cthulhu)

Get THE PHANTOM JUNGLE (Call of Cthulhu) - Printer Friendly

Get THE PHANTOM JUNGLE (Broken Compass)

Get THE PHANTOM JUNGLE - VTT Assets

* The elusive villainess of Death on the Reik. The players are assumed to be chasing her around the land, but because she really never did anything to them, and never really antagonizes them, they’re unlikely to care about her unless the GM makes some big adjustments.