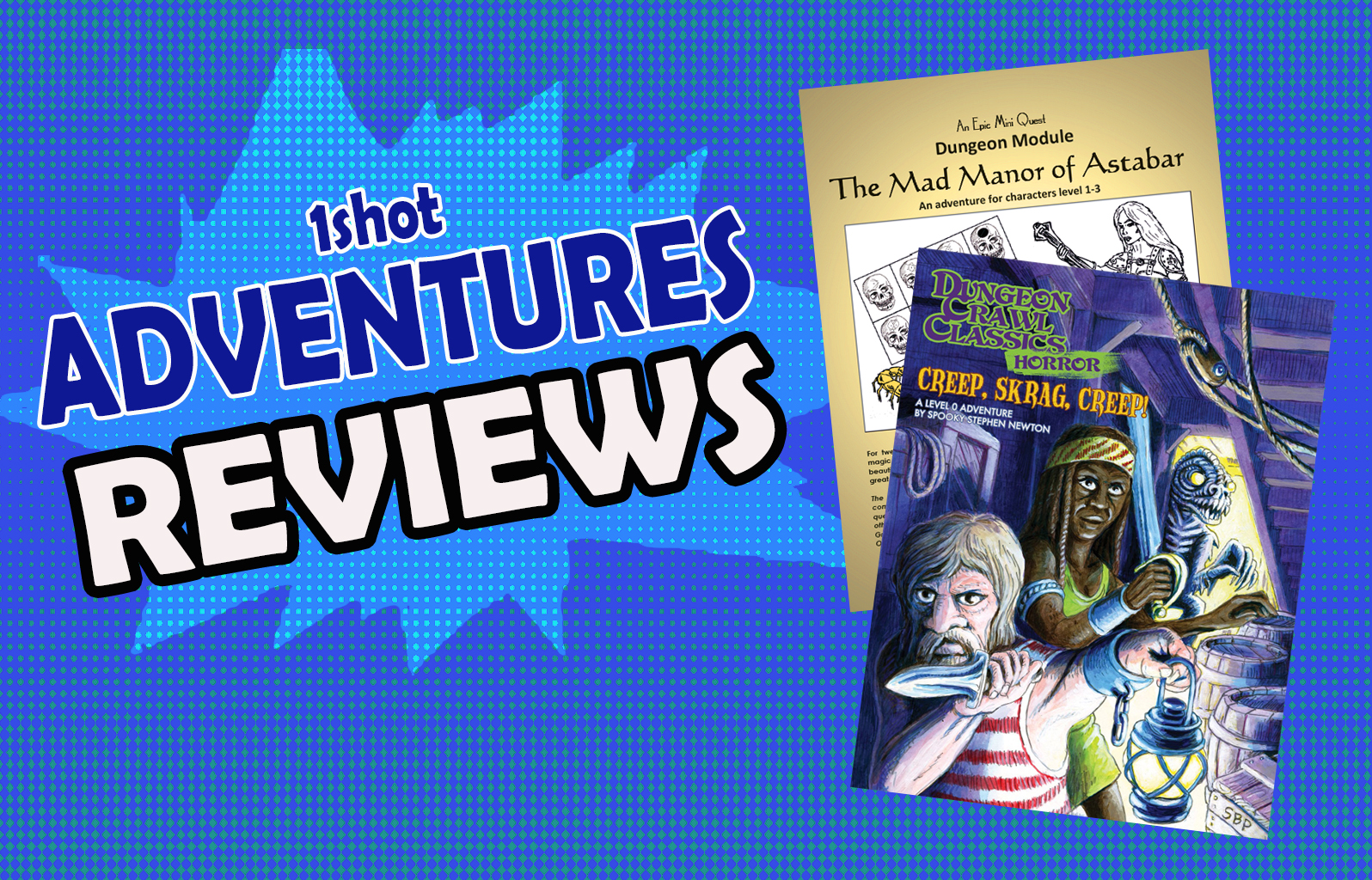 Part of the job of running a site full of self-authored RPG adventures is making sure I find time to play other creators’ great adventures! Recently, I had the opportunity to run two great fantasy adventures (light spoilers ahead!):

Dungeon Crawl Classics is my favorite OSR-style games. It feels so much like an evolved version of the original Dungeons & Dragons I first played as a kid, but dialed up to an 11. Not only do I like the game design — fast and deadly combat! magic that is wildly unpredictable! — but it has an A+ collection of adventures that are all high-quality, easy to prepare, and written by folks who deeply love the hobby.

Creep, Scrag, Creep! is one of those adventures. It is what Dungeon Crawl Classics calls a “funnel” adventure. Rather than each player taking one character into the adventure like in most RPGs, players generate four 0-level characters. Inevitably, most of these characters will get killed off (horribly) during the course of the adventure, leaving only a handful to survive and level up… to level one.

Funnel adventurers are always deadly, frantic, and a bit ridiculous, and I love them as a change of pace.

The entire adventure of Creep, Scrag, Creep! takes place inside a doomed ship filled with occult mysteries and a deadly monster that is hungry for 0-level livers. The PCs begin as miserable villagers who are leading a miserable life in a poor coastal town. But each year, a glorious ship – the Star of Nostro – arrives into town to transport a few fortunate villagers to a better life across the sea. The PCs the lucky winners of this year’s voyage!

Of course… this is all a perfectly planned trap. The Star of Nostro is actually transporting the villagers to an evil warlock who needs human sacrifices in order to summon some demons. Soon, the PCs awaken from a drug-induced slumber on the ship realize that they’re heading for certain doom, and being stalked by a creature they have almost no shot of killing.

While the premise of the adventure and the basic flow of the plot play like Alien, there’s enough wild flavor in this adventure to surprise players. There’s demonic pigs, a water-kobold that protects the vessel and can be summoned through a sea shanty, cabins full of weird, nautical magic stuff, and more. If you’re looking for a haunted house style adventure for a one shot, check this adventure out. It’s quite easy to port to other systems too.

You can check out my video review — as well as tips to run it great — here:

The Mad Manor of Astabar Review – A Great Frugal Dungeon

The haunted house theme continues with The Mad Manor of Astabar, a pay-what-you-want indie adventure written by David Dudka and designed for Dungeons & Dragons.

The setup is this: an old hermit named Astabar found an ancient wand and tried to deconstruct it. This experiment went horribly wrong and ended in disaster. Astabar was thrown into another dimension… and never seen again. His manor was left abandoned, and the PCs are lured there by a young bard who is eager to discover its secrets.

The rest of the adventure plays out as what I like to call, a “frugal dungeon.” A frugal dungeon is not a huge, sprawling, complex module that requires several sessions to play. Instead, it concentrates all the fun into a handful of rooms. Frugal dungeons are fantastic for new players, or for GMs to insert into a game when they’ve had a busy week and don’t have time to prepare something longer.

The Mad Manor of Astabar is one of my favorite frugal dungeons. It’s easy to prepare, fits into any campaign, and has a great combination of exploration and puzzle-solving.

The manor itself is three levels and about 20 rooms. There’s not a lot of combat encounters in the adventure, mostly small annoyances here and there.

The set piece of the adventure is Astabar’s dining room, where the PCs find the remains of a horrific dinner party. Astabar’s guests are now headless skeletons slumped over their meals. To solve the mystery of the manor, the PCs must find the missing skulls of Astabar’s guests.

This is such a simple and great premise for the adventure. With 8 skulls to find, and only 20 or so rooms, the PCs will be finding skulls constantly. The author did a nice job of hiding them in fun places too. None are too hard to find, so I doubt any group of players are going to get stuck for very long. There’s a lot of wonder in the manor too. There are fun rooms where gems fall from the ceiling, a room full of butterflies, and other rooms with strange, magical devices that the players will no doubt fiddle with.

I only have one real critique of this adventure. The dinner table puzzle may require some modification for players who aren’t good at solving visual puzzles. The adventure requires the heroes to return the guest’s skulls in a specific order established by runes and moon phases, but I just ended up skipping that and let the players put heads back in any any order they wanted. But that’s an easy modification to make to an otherwise excellent, frugal indie dungeon.

If you’d like my VTT assets for this adventure, you can download them here. Also, you can check out my video review here, along with some tips on other changes I made to the adventure.

Do you have any favorite “frugal dungeons” that can easily be inserted into a campaign and run in a single session? Let me know in the comments below!