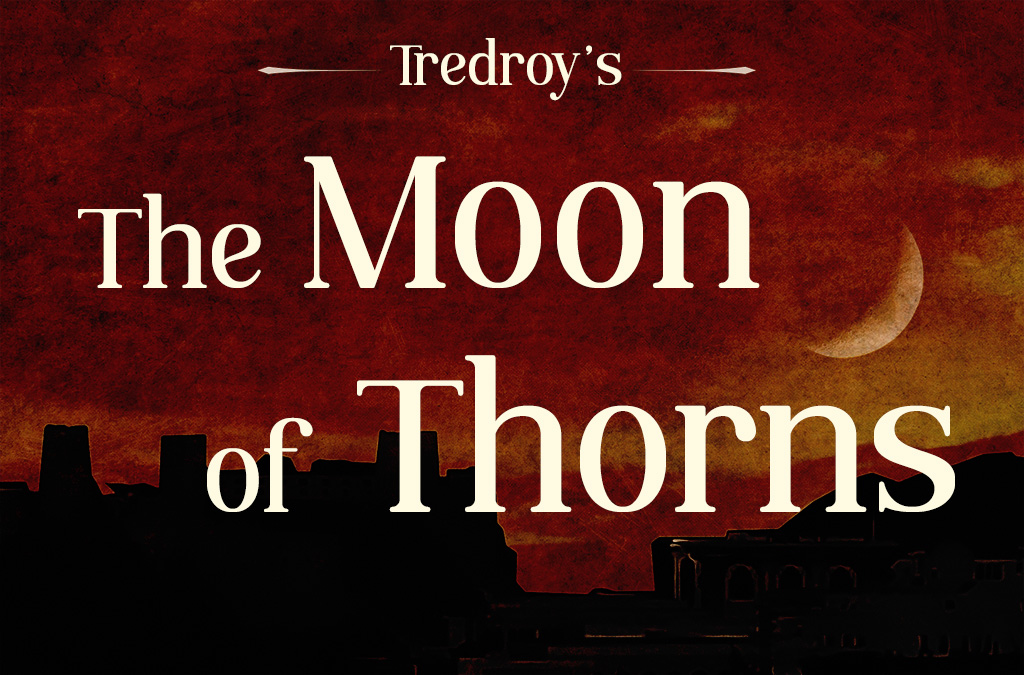 5 Ways to Make Urban Adventures Great – The Moon of Thorns

Fantasy roleplaying games are home to many magnificent, fictional cities. From the sprawling metropolises of Waterdeep, Lankhmar, and Sigil to the corrupt and insidious Arkham, Menzoberranzan, and Bögenhafen, these great cities connect players and stitch campaigns together.

How many adventurers have had an ale in Baldur’s Gate? How many investigators have saved Arkham from cosmic doom? Or escaped Mos Eisley on a freighter? Many.

As powerful a gravitational pull as these cities are, urban adventures are especially challenging to gamemaster. Too often, cities become mere checkpoints for heroes to sell loot, check for magic item shops, and then leave at dawn for the lich king’s mountain fortress. Or, all cities quickly become the same, holding desaturated streets filled with faceless NPCs, something-dragon taverns, and rolls on rumor tables.

This month’s free adventure dives into urban adventuring with The Moon of Thorns, an adventure set in Yrth’s cosmopolitan city of Tredroy. In writing the adventure, I thought about some of the best city-basted adventures I’ve played and run in, and present The 5 Rules for Great Urban Adventures:

Identify one or two quirks or customs that make your city unique. And then reinforce those quirks again anda gain. This helps make each city feel different from others. For example, locals may use certain slang (“dank ferrik!”), or constantly gossip about the mayor’s new wife. A specific fashion may be in style, and PCs will get strange looks if their belt buckles aren’t worn exactly right on the side of their hips. Like some real world cities, the city may shut down at certain, inconvenient times, or ban the sales of certain goods on certain days.

The more you can reinforce a city’s unique personality and charm, the more the players will feel like they’ve arrived somewhere new.

Cities exist because they have an established and strong code of laws. In many roleplaying games, PCs seem to always skirt on the edge of the law. They kill orcs, take their treasure, and leave their bodies, insult nobles and only get a harsh look in return, and never, ever pay their taxes.

In an urban environment, however, GMs should flip that on its head. Consequences need suddenly matter, and laws and customs should — largely — be enforced.

This rule doesn’t mean GMs need suddenly send his PCs to prison, but there should be consequences to borderline illegal or rude urban actions. City guards will show up during brawls and order players to move to a different, worse neighborhood. Fines can be imposed. Corrupt gangs might try to blackmail the PCs if they see them up to no good. Perhaps breaking the law earns the PCs a trip to the magister. He’ll let them off with a warning, but only after a lengthy apology.

It’s even better to combine this with Rule #1, and make sure each city has it’s own laws. In Yrth’s Tredroy, the city confiscates weapons as PCs come into town unless they are official members of the Mercenaries’ Guild. At the moment of their entrance to the city, the PCs have to decide whether to stow their weapons away at a storage facility, smuggle them in, or go get mercenary credentials. While this law creates a touch of inconvenience, it also creates interesting decision making options for players.

Rule 3: Embrace the Bustle… Using Lots of Side Quests

Cities should offer a plethora of adventure hooks and side quests. Even in a one-shot adventure, the bustling activity inside a city should offer players a chance to escape the main quest and do some side adventuring and plate-spinning. Diversions makes cities feel vastly different from wilderness and small town adventures, where options are usually more limited.

For example, in this month’s adventure, The Moon of Thorns, the PCs are searching Tredroy for a wanted hoodlum, Carac the Thorn. Finding Carac advances the plot, but I littered multiple opportunities for short side quests along the way. Carac was a huge fan of the gladiator games, so there’s a sequence where PCs can befriend gladiators and aid the arena’s Grand Referee. When they find Carac’s teenage friend, he escapes into the city. The PCs can detour to his apartment, where they can help his street vendor mother fend off some bullying competition. Or they can sit down and have tea with a devout Islamic reptile man who has no desire to see the teenager caught. All of these moments are short and can happen in <10 minutes of play time. Also, the PCs don’t have to do any of this to track down Carac, but all the stops along the way make the adventure feel more like a city.

In urban adventures, there should almost always be a way to talk your way through a situation. Unless the PCs are in a very bad part of town, drawing weapons and fighting on the streets should be highly unusual.

GMs should make sure most, if not all, of their city encounters have a way through them by negotiating, roleplaying, and using the social skills the characters have. This reinforces that cities operate differently from small towns and wilderness encounters.

A great example of this is in Star Wars‘ Mos Eisley. Ben Kenobi talks his way past stormtroopers, tries to talk his way out of a bar fight (and fails…), talks Han Solo into taking a rough job, and then helps Luke barter away his landspeeder for cash. Each of these small interactions, even when handled quickly, make Mos Eisley seem like a place where diplomacy and social skills matter.

Rule 5: Familiarity and Passion are Key

Cities are hugely complex. They have hundreds of years of history, dozens of landmarks, and unique cultures. This is why it’s harder to write an authentic-feeling adventure set in St. Louis versus the Necromancer’s Generic Forest of Doom. (Obviously, if you live in St. Louis, you may disagree.)

Set your urban adventures in the cities that you love and know well. Your deep familiarity of the place help make your adventures vibrant and memorable.

The GM who can add, “on the way to the tavern, you take a few moments to stare up at the Great Drunkard, one of Waterdeep’s colossal walking statues,” adds authentic character to the adventure. The more culture and trivia you touch on, the more the city will feel alive.

Obviously, real-life cities are the easiest to do well, given the massive amount of information, movies, and tv shows that are available. Popular fantasy cities have whole books and supplements devoted to them. Start small and focus on one or two sections of the city, versus the entire thing. The new Call of Cthulhu supplement Harlem Unbound, is a fantastic example of focusing on one section of a larger city.

This Month’s Free Adventure – The Moon of Thorns

In this month’s adventure, I went back to one of my favorite fantasy cities, Tredroy, a city that I spent a year gamemastering a campaign in. I love Tredroy because it is geographically diverse, and combines real-world religion, politics, and culture with familiar fantasy tropes. This makes it easy for players get up to speed on it without a lot of detailed explanation, but still offers a rich background to explore.

In The Moon of Thorns, the PCs are fresh to the city and asked to track down a hoodlum who assaulted a baron and embarrassed his soon-to-be wife. As they traverse the landmarks of Tredroy looking for the scoundrel, they soon stumble into the path of a secretive death cult, who is finalizing a dark scheme that they started centuries ago.

The Moon of Thorns is freely available for GURPS and Old School Essentials (i.e., OSR / D&D), with the OSR version taking place in a slightly adjusted, more generic fantasy city than can easily be translated into other fantasy campaigns. As always, it contains pregenerated characters, maps, and fancy handouts, so GMs can get started right away:

Get THE MOON OF THORNS (GURPS Fantasy / Banestorm)

Get THE MOON OF THORNS (GURPS Fantasy) - Printer Friendly

Get THE MOON OF THORNS (OSR/D&D) - Printer Friendly

Get THE MOON OF THORNS - VTT Assets

What are some of your favorite RPG cities? Let me know in the comments below!

Related: A Horror Adventure in the City of Ravenna