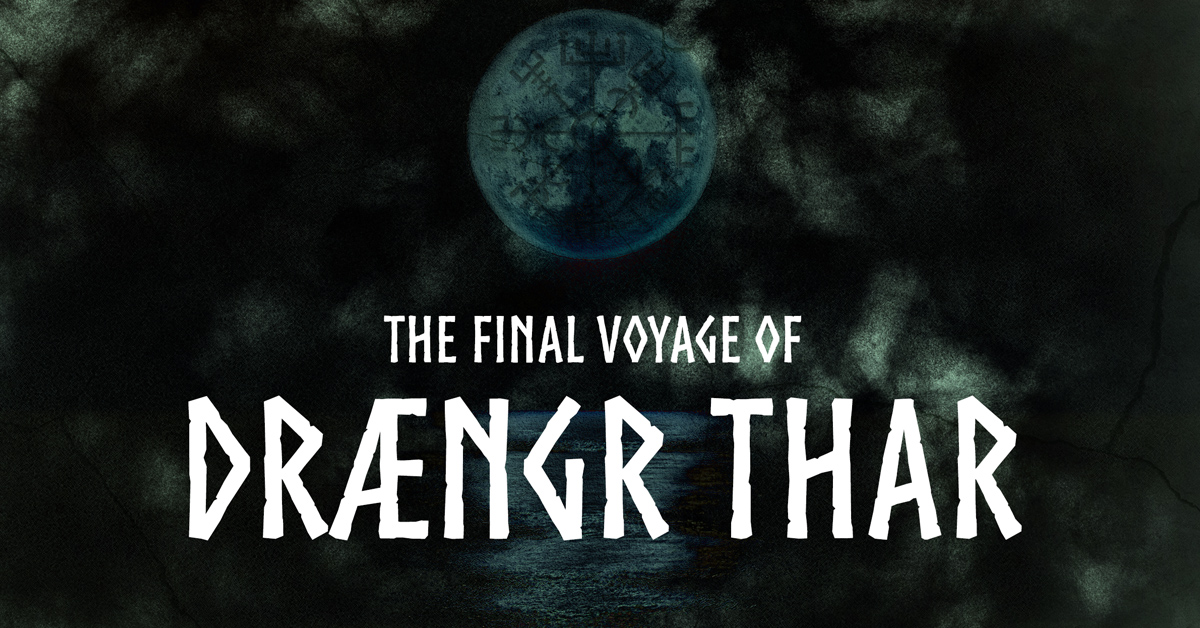 Rebooting an Undercooked Adventure – The Final Voyage of Draengr Thar

I’ve written a lot of adventures for this site over the years – twenty-seven in all! Somehow, I also find time to run other adventures, too. I recently had a blast running Goodman Games’ Tomb of the Savage Kings for Dungeon Crawl Classics, my favorite OSR game, which was only improved by the appearance of a mummy juice elemental – something I never would have come up with myself.

But not all adventures are as well-crafted as that one. As I look for adventures to run, I often come across some that have the kernel of a good idea, but aren’t quite there. Let’s talk about Lords of Darkness.

Lords of Darkness is an ancient TSR AD&D supplement that features a clever premise — a handful of short adventures designed around a single type of undead monster. I bought this decades ago and was excited to pit my players against these scenarios. If constraints breed creativity, then an adventure which only focuses on shadows, or mummies, had to be clever, right?

Wrong. Unfortunately, Lords of Darkness was a massive let down, probably due to the madcap “don’t playtest, just ship everything now” era of TSR at the time. The adventures had barely-sketched, generic setups, the undead monsters weren’t used in creative ways, and some of the scenarios didn’t even have maps. But still, I held on to this book for years, just hoping I was wrong, and I’d change my mind about it one day. (Keeping it was 100% to do with the awesome Jeff Easley cover!)

Time for a Reboot!

As a way to refuel my own creativity and game design sensibilities, I often try to reboot adventures that I don’t think quite worked. It also helps me reconnect with the intrepid game designers who wrote content decades ago, when the hobby was nascent.

This time, my reboot target was “The Tombs of Deckon Thar,” Steve Perrin’s adventure from Lords of Darkness. This adventure focused exclusively on wights, intelligent undead who have returned from the grave with a hatred for the living.

“The Tombs of Deckon Thar” isn’t woefully bad, it is just very bare-bones, similar to what you’d find in an article of Dungeon magazine at the time. The heroes find an ancient barrow, venture underground, and fight, well, wights. The underground chambers are indistinguishable from each other, there’s no real history to the place, and it will inevitably turn into a repetitive hack-and-slash-a-thon that leads up to a boss battle with a named wight who has a magic sword and is sitting on a pile of treasure.

My main gripe with this old-school adventure is the lack of unsettling horror or even creepiness. Fighting wights in their should barrow should be horrifying AND also give you a sense of why they’re cursed and buried there — two things this original adventure didn’t do.

With this month’s free adventure, The Final Voyage of Draengr Thar, you’ll find a massive update to the original premise that inspired it. The adventure is now set in the cold, medieval era of the Vikings and has a much stronger setup. The barrow king has a dark secret tied into Norse mythology, and there are now NPCs to flesh out the history of this cursed place.

I especially made sure that there was more time at the beginning of the adventure before the PCs discover the barrows, and what happened to the men they were there to rescue. This gives GMs time to create real tension… and then spook the PCs when they first encounter the monsters beneath the earth. While I intended to write this one-shot just for D&D 5E and GURPS, the creepiness factor that emerged inspired me to include a port to Call of Cthulhu Dark Ages! Medieval horror has a special place in my heart.

If you’re interested in full details on all the updates and changes I made when I rebooted the adventure, check out my YouTube video. Otherwise, you can download the finished Final Voyage of Draengr Thar below. As always, the adventure includes pregenerated characters, handouts, and VTT assets so GMs can prep and run it with as little prep as possible.

If you have any favorite “bad” adventures that have inspired better ones, let me know in the comments below!

Get the FREE Adventure here!

Get THE FINAL VOYAGE OF DRAENGR THAR (GURPS Vikings)

Get THE FINAL VOYAGE OF DRAENGR THAR (GURPS) - Printer Friendly

Get THE FINAL VOYAGE OF DRAENGR THAR (5E)

Get THE FINAL VOYAGE OF DRAENGR THAR (5E) - Printer Friendly

Get THE FINAL VOYAGE OF DRAENGR THAR - VTT Assets